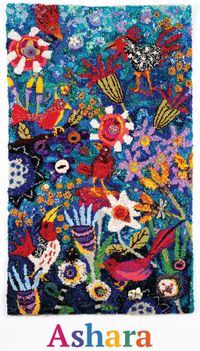 The brainchild of Scottish-Canadian reggae artist Jason Wilson (Wilson & Swarbrick/Pee Wee Ellis) Ashara presents a joyful blend of reggae, jazz and Scottish folk surveying those rebel musics which have traversed the Black Atlantic over the past 400 years. Wilson, who provides vocals, guitar and piano, is joined by Jamaican-Canadian guitarist Carl Harvey (Toots & The Maytals) and a cast of award-winning Scottish traditional musicians including

multi-instrumentalist Ali Hutton (Old Blind Dogs), Jack Smedley (fiddle; Rua) and John Somerville (accordion; Treacherous Orchestra). Canadians Marcus Ali (saxophones/whistles), Michael Shapinko (bass), Vince Reel (drums/guitar) and Laurel Tubman (vocals) complete this eclectic side. Ashara artfully reimagines songs from the folk tradition such as ‘My Love is like a Red Red Rose’, ‘Matty Groves’ and ‘Sir Patrick Spens’, as well as numbers from the variety of canons these artists are associated with including: ‘54-46 (That’s my Number)’, ‘The Ballad of Jack McLaren’ and Wilson's current Canadian reggae chart-topper ‘Ready to be Loved’.

To book ASHARA to appear at your event contact ...

Jason Wilson is a two-time Juno-Awards nominee, Canadian Reggae Music Award winner and Bestselling author from Downsview, Ontario. He is the protégé of Studio One keyboardist Jackie Mittoo and has performed, toured and recorded with - among others - UB40, Sly & Robbie, Dick Gaughan, Martin Carthy, Brinsley Forde (Aswad), The Mighty Sparrow, Ernest Ranglin, Pee Wee Ellis and Alanis Morissette. He was also one half of the critically acclaimed project Wilson & Swarbrick, alongside the late English fiddle icon Dave Swarbrick. An Adjunct-Professor of history, Dr. Wilson has six books to his name, including King Alpha's Song in a Strange Land: The Roots and Routes of Canadian Reggae (UBC Press, 2020).

Wilson’s music has been described as, among other things, “Folk-Reggae”, "Global-Roots" and "Post-Reggae”. While none of these quite cover it, Wilson's art is, nevertheless, truly unique; it is a sound where the reggae portion is freely brushed – not strictly detailed – allowing space on the canvass for wildly divergent inspirations such as Bach, Scottish Pibroch, folk-rock and bebop to peek through. In essence, Wilson combines reggae with the improvisational sensibility of jazz and then layers it with the storytelling quality of the Scottish folk tradition.

Wilson's blend of reggae is, as The Beat’s Ted Boothroyd confessed, “deeply satisfying reggae for aware, intelligent grown-ups.” Likewise, No Depression’s Douglas Heselgrave believed that “the more I listen to Jason Wilson…the more I am convinced that he's onto something that may just help broaden the spectrum of how people consider reggae music.”